On the right path

There is so much to catch up on that we are not sure it will fit into one blog.

We had an amazing 10 days or so with some of the Trustees of Ratidzo Trust. Hopefully you have seen the film of their trip.

Since then our solar pump has been fitted into the well,

the tank rolled onto the tank stand(and off again!) But 2nd time round we managed to fix it in place.

We held our breath as the tank filled with water. Would our brick built stand take the strain? It did! So we now have running water to 3 taps, one at the stand, another by the shade garden and the third at the fowl run. We have also run another pipe towards the orchard. After a few leaks to old pipes we also have water connected to the lodges.

A rotting smell coming from the mushroom project saw us repacking half the pockets. We hope we managed to save some of them, time will tell. It’s also a challenge keeping the moisture level correct in this crazy heat and to stop the mushroom pockets from drying out. This really is a trial project, but we don’t give up easily.

Our 15 layers continue to give us on average 13 eggs a day, which quickly sell. Our roadrunner chickens now number 43 and we have also recently added 4 ducks to the poultry project. We hope to increase both our roadrunner and duck population soon. Due to the economic climate here and severe price rises we are looking into alternative ways to feed/supplement our poultry. We have dug 3 ditches & filled them with cow manure, watered and covered them for 2 weeks.

The result is plenty of grubs, termites etc for the chickens to dig up and eat. Looks like they had fun doing it too.

Sadly 3 of our paw paw trees got eaten overnight by termites. All our fruit trees have now been treated with termite poison to hopefully stop any similar problems. At least watering isn’t such a problem now. It takes about 1hr to water all the trees, which need around 80ltrs each per week.

The shade garden is now underway. Several days of adding good fertile soil to our heavy clay soil, digging it in, watering, digging it over again was sweaty tiring work. 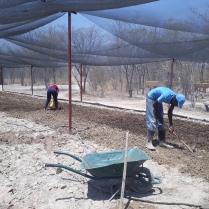 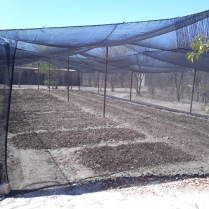 Our soil is great for making bricks but very poor at growing things. We hope the hard work will get good results and plan to sow cabbages and spinach.

Plans are continuing on opening a community shop. The idea is that the families we are working with and other vulnerable people can bring things they grow or make to sell through the shop. The charity will take just 10% of any sale just to cover the running cost of the shop. This should give people a better chance of selling their items rather than them going door to door in hope of a sale. We would like also to have a notice board in the shop where they can advertise other things for sale that can’t be put in the shop for example, a goat or cow. My carpentry skills have been tested building a shop counter and a sign has been ordered from a local signwriter
Who will run the shop going forward is our next question?

We had another monthly meeting with the families we are working with. It’s very pleasing that some have really got on and improved things, using profits to start other projects etc. The whole area is suffering though, due to the economic situation which has escalated in the last few weeks. This has affected many of the projects the families are doing and has caused some hardship. The broiler chicken projects are not workable at the moment. The selling cost has gone up from $6 to $10 to cover feed costs, not a price many here can afford. That’s if you can even get the chicks in the first place. Two families haven’t been able to get chicks since May and it’s still difficult to order them now. So for now some projects are on hold or reduced till things improve. That said we are working on other ways of helping the families, for example, the community shop and are looking at other options also.
Happily most still have goats and chickens from the ones we gave them 3 years ago and all are in a better position than when the project started.

A few weeks ago a family came to see us who have a son living with severe disabilities.

They had come to us as they were told we may be able to help them set up a project to help with his living costs, around $70 a month. The mother is his full time carer and the father is a builder. With no employment they are struggling to live and have 4 other children including twin babies to look after also. Due to the economic situation again the project idea is not viable at this time. But we have been able to offer the father some building work by bringing forward some of our plans. One of these was to add pathways around the fowl run, mainly aimed at keeping things dry during the heavy rains. 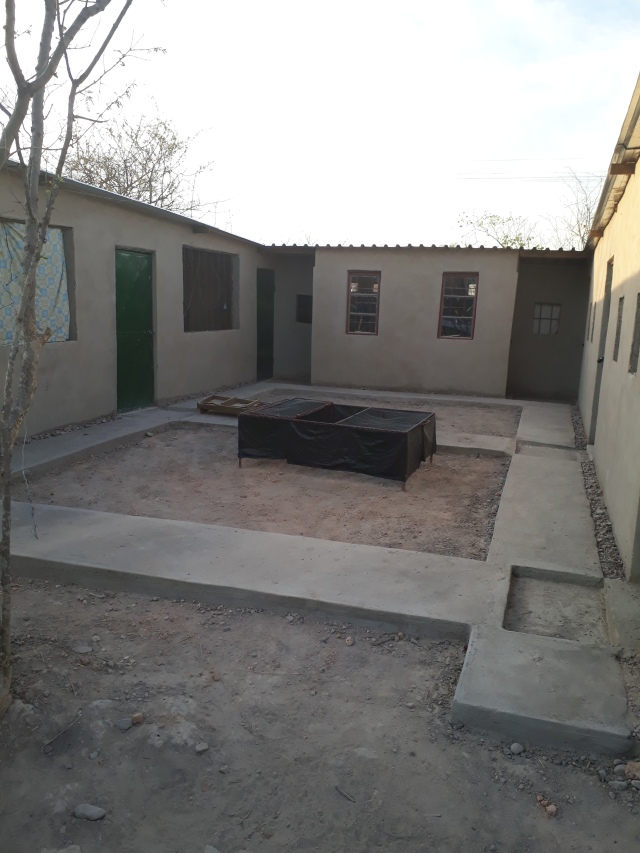 But we have also added sunken areas in front of each door to allow us to add bio-security treatment. So as you enter each room your shoes will be disinfected to stop the spread of any diseases. He is now also working on another of our buildings, it has been nice to help this family and we hope to be able to help them further in the future.

It was lovely to visit Neuso Primary School to officially handover their 50 chicken layers and feed. We were happy to pay for the transporter to be serviced and it is up and running again.

The father of one of the children, Denzel, who will benefit from the transporter running is currently having lessons and hopefully will soon pass his test so that the transporter can start bringing children with disabilities to school. The sale of eggs should cover the ongoing running costs.

Well I’m tired just writing this blog so will leave it there and catch you up on other things soon.

This entry was posted in Zimbabwe. Bookmark the permalink.

1 Response to On the right path